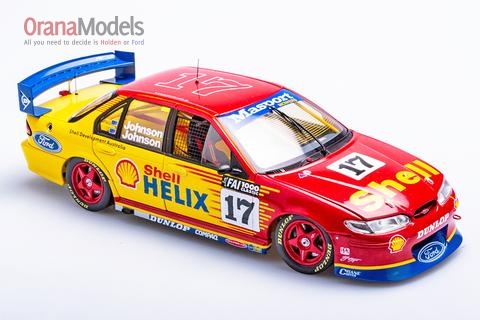 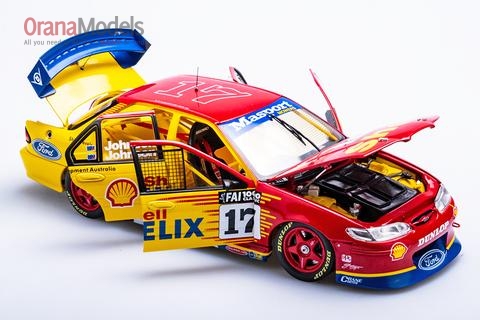 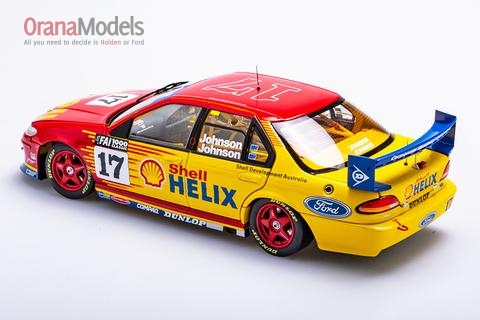 Biante Model Cars are pleased to present the 1:18 Scale Ford EL Falcon driven by Dick Johnson and Steven Johnson at the 1998 Bathurst 1000.

With Dick Johnson entering the twilight of a Hall of Fame Australian touring car racing career in the late 1990s, he had a ready-made replacement in the form of son Steven to take over his famous No.17 Ford Falcon.
In 1998, before it came time for the three-time Bathurst 1000 winner and Ford favourite to hang up the helmet, Dick and Steven were able to fulfill a long-held ambition and tackle Mount Panorama as a father and son driver pairing.
Johnson Junior made his first race starts aboard a Dick Johnson Racing Ford in 1994 and finished seventh in his Bathurst 1000 debut the same year, becoming a regular driver of the team’s second car at endurance races in the following years.
For the 1998 enduros, and with Dick on the cusp of announcing his retirement season the following year, the decision was made to split the iconic combination of Johnson and John Bowe for the first time since the Tasmanian joined DJR in 1988 in order to allow Dick and Steven to pair up in the one car.
Their first race together came in the traditional Bathurst lead-up at Sandown’s Tickford 500, Johnson the elder qualifying the car eighth in the Top 10 Shootout. The pair rose as high as fifth in the wet on race day (despite a broken windscreen wiper!) when contact with a spinning back marker pierced the radiator and put them out after 99 laps.
The 1998 Bathurst race would prove to be a tough one for the DJR Falcons with both struggling for speed down Conrod Straight compared to their rivals, the Johnson/Johnson car to the tune of 20 to 25 km/h down on a competitive pace.
Evidence of the shortage of straight-line handling was that Bowe, paired with Cameron McConville in the No.18 Shell Helix Ford, only squeaked into the Top 10 Shootout by qualifying 10th.
Johnson wasn’t so lucky, falling six tenths of a second shy to be 12th on the grid to miss the shootout for the first time since its inaugural running as Hardie’s Heroes in 1978.
Race day then proved just as unkind to the Johnson and Johnson combo.
The fourth-fastest time in Saturday afternoon’s final practice session had flattered to deceive, and the No.17 wasn’t able to make significant headway by the time Dick handed over to Steven at the first pit stop.
Johnson the younger was able to move up as high as fifth during his opening stint before their race came to a sudden end.
Steven was caught up in a multi-car crash on the run down to Forrest’s Elbow on Lap 60, a hard impact to the rear of the red and yellow Ford damaging the fuel cell and forcing the team to retire the car.
The Johnsons’ second and final Bathurst 1000 together before Dick’s retirement at the end of 1999 proved to be a much happier affair, the pair fighting for a podium position before coming home fourth in the blue oval hero’s Mount Panorama swansong.
While their maiden Bathurst outing as father and son failed to produce a memorable result in 1998, the event stands as a significant moment in the Johnson family’s history at the Mountain.

Forming part of the Biante Dick Johnson Collection and coming with a signed Certificate of Authenticity by Dick, this is yet another model that is a must have for DJR and Ford fans alike.